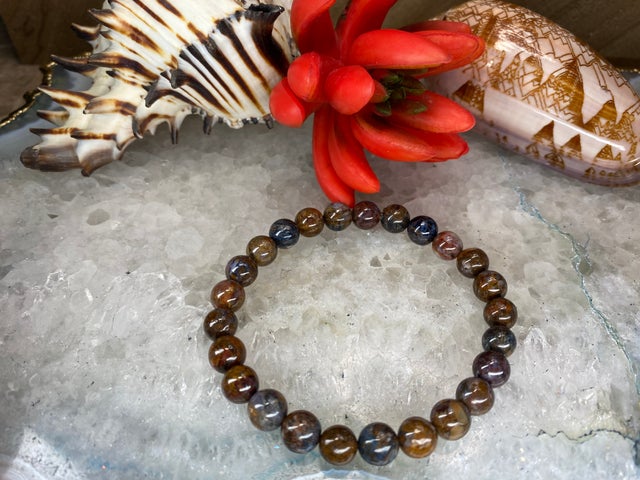 Pietersite has been called the Tempest Stone for its colors of deep blue and gray with metallic gold and flashes of brilliant chatoyancy as it catches the light. It also occurs in golden yellows and browns as well as milky white. Pietersite is composed of Tiger Eye, Hawk Eye and Jasper and is believed to discharge negative energies and cleanse the aura. Named after its finder, Sid Pieters of South Africa, Pietersite is said to hold "the keys to the kingdom of heaven" and promotes "walking your truth. " It reminds you that you are a spiritual being on a human journey, and can be used for a vision quest or shamanic journey. During moving meditations or Tai Chi, it accesses a high state of altered awareness. Said to dispel the illusion of individual separateness, it removes conditioning imposed by other people. Linking you to inner guidance, it tests the veracity of other people's words. In past-life healing, Pietersite processes ancient conflicts and suppressed feelings and removes disease caused by not following one's own truth. It releases you from vows and promises made in other lives that have carried over into the present.

Each stretchy bracelet is made with 8mm beads and will be cleansed before shipment!